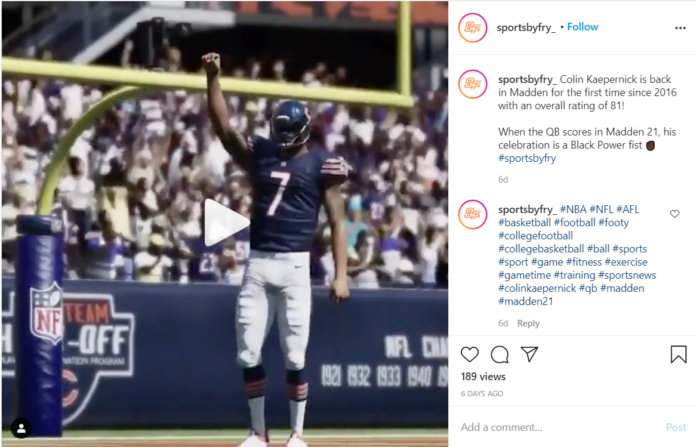 After a 3 year hiatus, former pro quarter Colin Kaepernick has made a comeback to the free agency roster in EA’s latest installment in the Madden series.

Kaepernick has become a symbol against injustice since his decision to kneel during the national anthem during the 49ers’ last preseason game of the 2016-2017 season. Kaepernick aimed to raise awareness of police brutality within the African American community. However his stance was not received well by most in the NFL fan base. With a dismal record of 1-10 on the year, Kaepernick would eventually be cut from the roster and be black-balled from the league. Two seasons removed from a 12-4 season with super bowl run.

Since his departure from the league, Kaepernick has worked tirelessly to continue to spread his message, founding his charity Know Your Rights where he brings awareness to black and brown communities through education and self-mobilization. Kaepernick also signed a deal with Nike to promote awareness of his situation and to unite minority communities to rise up and make a difference.

Kaepernick returns with an 81 overall rating which makes him not only the highest rated free agent QB in the game, but also eclipses 17 players who are starters on their respective teams. Will Kaepernick ever make a return to the NFL? Only time will tell. But for now, fans will have to settle for the virtual gridiron.