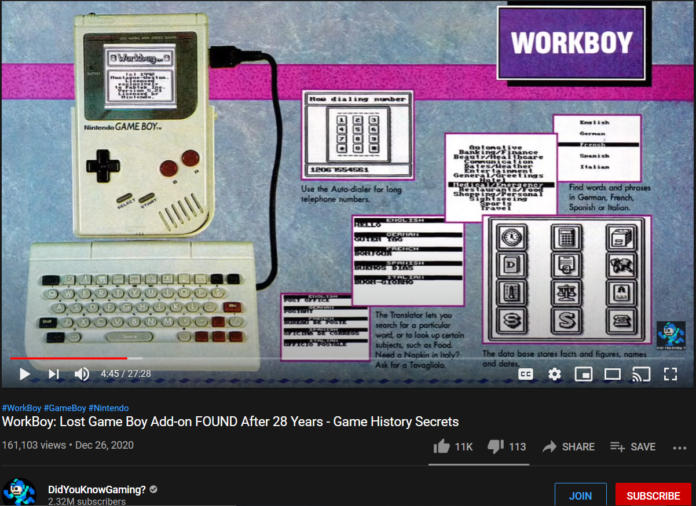 An unreleased Game Boy add-on called the WorkBoy has been found after 28 years. This keyboard attachment gave the Game Boy a variety of productivity-related apps. Plugging in the Game Boy and propping it up on the stand turned the handheld game console into a portable computer with apps such as an address book, calendar, appointment book, database, and world clock. The WorkBoy was trademarked by Nintendo and would have been an officially licensed accessory. It was shown at trade shows including CES 1992 and featured in gaming magazines of the time, but was never released.

The WorkBoy was scrapped just months before its planned launch. Nintendo was planning to cut the price of the Game Boy, and this meant the add-on could not be priced competitively. Even if it had released, the soaring price of D-RAM would have been a challenge for the add-on.

Liam Robertson of the YouTube channel Did You Know Gaming? got his hands on a prototype of the WorkBoy. However, it wasn’t complete: it needed a cartridge to work. Luckily for him, the ROM had been leaked earlier in the year. Robertson finally had a functioning WorkBoy, nearly 30 years after its creation.