Home Tv The Liberator: Netflix's animated take on the heroics and horrors of war
Tv 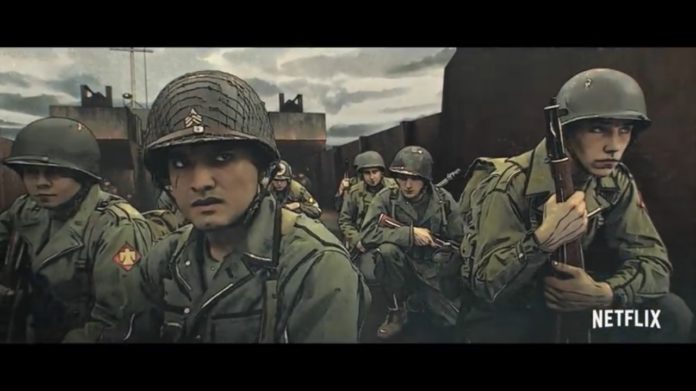 Based on a true story, The Liberator is a Netflix original miniseries surrounding Felix Sparks and the 157th regiment comprised of Seminole, Sioux, Apache, Cherokee, Choctaw, and Mexican Americans.

The series follows the Thunderbird Division and their 500 day trek that takes the regiment from the crossroads of Italy through southern France and into the fatherland of Germany. The main focus of the story is on Felix Sparks who we see earn this ragtag group of soldiers’ trust and climb through the ranks from Lieutenant ultimately becoming an Lieutenant Colonel by the end of the war. The supporting cast of soldiers such as Cordosa, Hallowell, Gomez and Coldfoot are all distinct in their own way and help Sparks make this regiment feel like a brotherhood even though back home in the United States they would be segregated. This theme is what really sells the show as everyone who serves, no matter their heritage, is an American hero.

The score in this miniseries is also very well done as there are definitely many emotional scenes where the orchestra heightens the somber mood and at points can bring a tear to your eye. There are various situations such as seeing people you have grown attached to make the ultimate sacrifice to the sight and smell of trains full of dead prisoners from concentration camps that really tug at your heart strings.

One of the only gripes I have against this show was that some of the writing was a tad bit cliché during the slower parts building up to the action scenes. Nevertheless, there are also some parts where the writing is excellent especially in instances where Sparks has to increase the morale of his regiment before leading them into hell.

What sets this series apart from other world war two flicks is the art style they use which is essentially digital animation over actual footage (which you can see the behind the scenes photo below). While on the surface it may seem a little gimmicky, I can assure you the animation style does not take away from the gruesome spoils of war that this show provides.

Overall, I would highly recommend that you take the time and give this miniseries a shot. At four episodes long and each one being roughly under an hour in length, it should be an easy and relatively satisfying binge watch about one of the lesser known stories of the second world war.

Is there a new Neo?

Is there a new Neo?

The most important skill in a marriage is…..