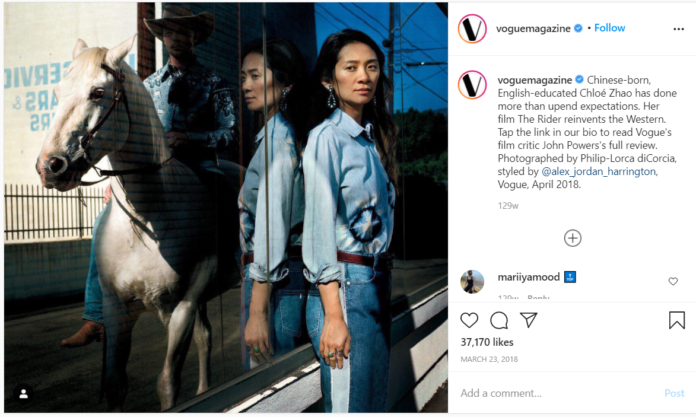 Director Chloé Zhao, known forMarvel’s upcoming Avengers add-on The Eternals, took the Golden Lion at the Venice Film Festival Saturday, the showcase’s top honor. She is the fifth woman in the festival’s 88-year run to do so, according to The Hollywood Reporter’s Rebecca Keegan.

Zhao’s film, Nomadland, stars Frances McDormand as a widow in a mining town in Nevada devastated in the wake of the Great Recession, who decides to embrace life on the road. The film premiered at Venice and the Toronto International Film Festival for the same day and is only fifth movie directed by a woman to win the Golden Lion, and the first since Sofia Coppola’s Somewhere in 2010.

At Venice, Vanessa Kirby claimed the Best Actress prize for pieces of a Woman. This year’s body, included President Cate Blanchett, who handed out prizes in a half-empty theater, with many winners accepting their awards virtually amid the COVID-19 pandemic.

The festival instituted changes in health and safety with temperature checks and outdoor screenings limited to half capacity as well as while requiring social distancing and mask-wearing. Venice is traditionally a major launchpad for Oscar season and it remains in limbo with this year’s awards season and theatrical releases.