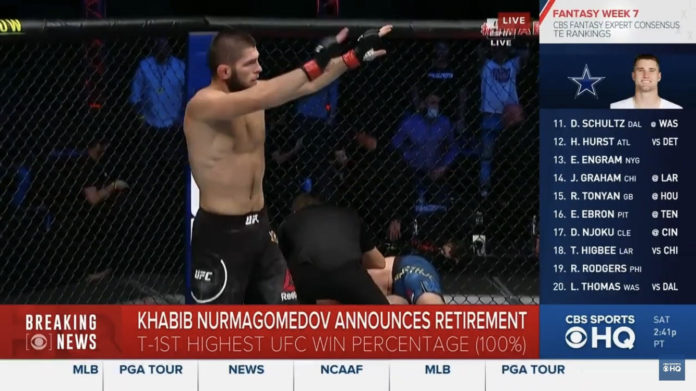 On Saturday October 24th, Khabib “The Eagle” Nurmagomedov claimed his 29th professional win in UFC 254 by beating Justin “The Highlight” Gaethje via submission in the second round by triangle choke and soon after retired from the sport for good.

The story of Khabib Nurmagomedov would not be the same without his father. Khabib’s dad Abdulmanap Nurmagomedov, who unfortunately passed away in July due to COVID, was the single most influential person in Khabib’s life. Growing up into the farming life in Southern Russia, Khabib had to essentially fight his whole life. He has fought boys, he has fought men, and he has even fought bears. The UFC however gave him a platform to show the world that he can be the most dominant hand to hand combatant the MMA has ever seen. This was the first fight he has ever had without his father. Without his father’s presence in the ring one could assume that the emotional stakes of this fight were the highest they have ever been.

After the fight was over, Khabib announced his retirement from the UFC. He stated that he had promised his mother that after his father had passed away he would step away from the octagon for good. Khabib did indeed close the final chapter in his legacy with the victory over Justin Gaethje, which solidifies him as one of the greatest sports combat athletes of all time.

Even former UFC lightweight champion Conor McGregor had kind words to say about the pound for pound number one fighter in the UFC.