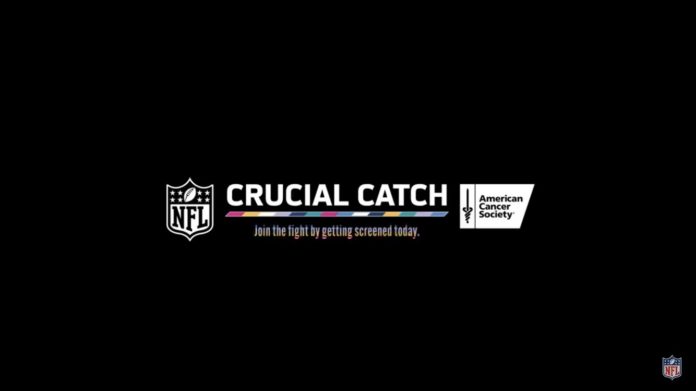 With the month of October already in full swing, so is the NFL’s Crucial Catch campaign to raise awareness for all those who have been or are currently fighting cancer.

According to the NFL, the organization has raised over 22 million dollars for the American Cancer Society since it first began the campaign back in 2009. The most important part of the program is to make everyone aware about Cancer and to encourage people to get screened and to take early action in case diagnosed. While COVID-19 may be distracting everyone from this great cause, it is important to spread this positive message as much as possible.

Honestly this is one of my favorite awareness campaigns among all the four major leagues. The sole reason behind this is personal as my grandmother has been diagnosed with breast cancer on multiple occasions. I remember every chance I could I would do my part and be there for her. More importantly I would support and raise cancer awareness as much as I could so that others could understand in case they found themselves in a similar situation. While the campaign used to be just breast cancer awareness, the NFL over the last couple years has made the change to include all kinds of cancer and focus on the bigger picture which I think should be commended.

Much like in most sports, players come in all different shapes and sizes as well as come from different backgrounds. With the crucial catch campaign, it gives players the platform who have a positive message to spread such as James Connor the ability to do so. James Connor, who is currently a running back for the Pittsburgh Steelers, is an inspiration to anyone battling cancer. Ever since Connor was diagnosed with Hodgkin’s Lymphoma in College, he has been the perfect role model to show that you should never give up fighting. It is also nice to see so many players, coaches and personnel standing together to support such a great cause.

If you are interested in purchasing any of the NFL’s crucial catch merchandise, than you can follow the tweet below to visit the Official NFL Shop Website where proceeds from the purchases will go to the American Cancer Society.