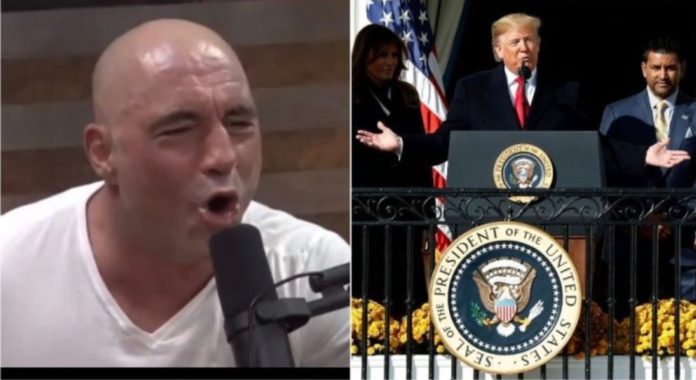 During episode #1535 of “The Joe Rogan Experience” podcast, Joe Rogan was asked by his guest, Tim Kennedy, “Would you be a control mechanism to the candidates, like do a Biden-Trump debate with Joe Rogan hosting? Your questions.”

Joe Rogan remarked, “If they wanted to do that, they both wanted to come here to Austin, and sit down to have a debate, I would one-hundred percent do it.”

Tim Kennedy later reached out to both presidential candidates on Twitter, and one of them answered…

Joe Biden has yet to comment on Trump’s acceptance of Rogan’s offer to moderate a debate.

If Biden agrees to the debate, and it ends up happening, it would be a four hour debate. The debate would be very different from the current style of Q and A format debates, such as the NBC Presidential Debate. Rogan wants to have a long form conversation, instead of giving candidates a limited amount of time to answer questions. There would be no studio audience, just two candidates in a room, with a moderator, having an in-depth conversation.

Rogan stated, “First of all, I would want no one else in the room, just the three of us, and you would have to stream it live so no one can edit it. I would want them in there for hours.”

Tim Kennedy replied, “We would get to hear what they actually believe in, what they’re gunna do, who they’re gunna appoint, what judges are gunna be coming in, what policies from gun control to whatever else. Why can’t we have that?”

Joe Rogan hosting a presidential debate could have a massive impact on how we elect politicians in the future. It would be the first time in modern US history that two presidential candidates sit down, have a long form conversation, and broadcast it live to the public. Podcasting might be on its way to becoming a popular platform for political candidates to talk to voters about policy.