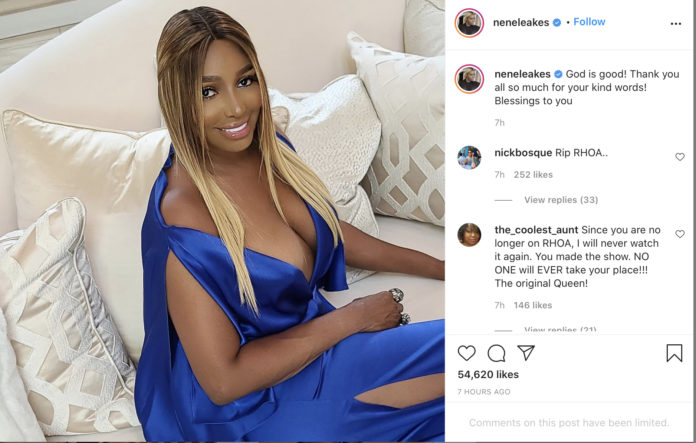 Television Personality, Nene Leakes, just made an official announcement about whether or not she will be returning to BravoTV’s top rated franchise, ‘The Real Housewives of Atlanta’.

Fans of RHOA have taken to social media to express their sadness after Nene Leakes posted a video of herself explaining that she will not be on the newest season of the hit show. This comes as a shock to The Real Housewives community as Leakes is known as a staple figure of the franchise due to her ‘OG status’ of being casted since the first season of the show that aired back in 2008. Her decision was supported by several prominent figures of the franchise, as such Kyle Richards who contemplated over a decade of memories with Leakes through a touching social media post (below).

Host of, Watch What Happens Live and series producer of The Real Housewives, Andy Cohen, took to Instagram to show support of Nene Leakes and her decision to leave the show this season. Viewers need not be too upset, as both Leakes and Cohen are open to collaborate on future seasons of the show; essentially leaving an open spot if ever she decided to return.

The Real Housewives of Atlanta is currently filming its 13th season without Leakes, who denied a demoted position as a ‘friend-of the wives’ on the show. However, with Leakes’ departure, the series was able to cast two new wives who will {hopefully} bring on drama. It will not be the same without seeing Nene Leakes holding a peach on the infamous intro to the show, however with such a strong response from fans, it will not be a surprise if she makes a return to the series next season.