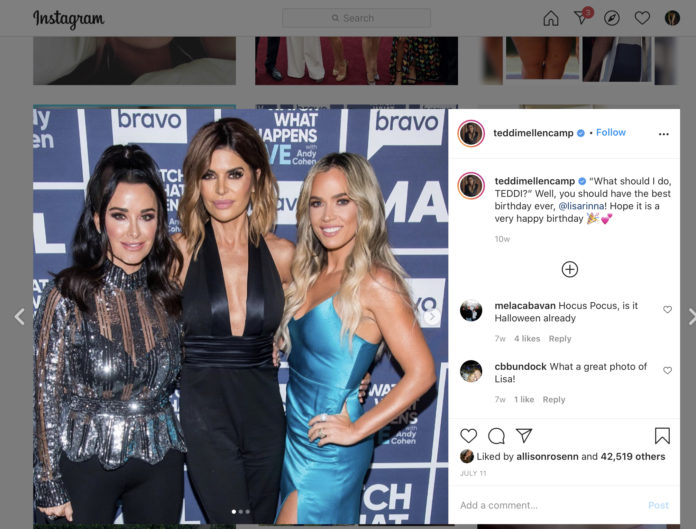 After three consecutive seasons on ‘The Real Housewives of Beverly Hills’, Teddi Mellencamp has officially given the news that she will not be returning to the top-rated reality television franchise.

With season ten of the RHOBH coming to a close this week, rumors about the future casting of the show have been swirling ever since former housewife, Denise Richards, announced she would not be returning to show earlier this month. The newest information fans have has come from Richards’ co-star, Teddi Mellencamp, who has just revealed she will follow in Denise’s footsteps with this past season being her last. Mellencamp announced her departure through an Instagram post (see below) where she claims that the show’s producers decided not to renew her contract for the upcoming season.

Viewers were introduced to Teddi Mellencamp three years ago as the daughter to the acclaimed country singer, John Cougar Mellencamp. Despite her three seasons on the show, Mellencamp continually faced backlash for being ‘boring’ and not contributing to the dramatic storylines throughout the series. In addition, a recent scandal involving her nutrition program, All In By Teddi, sparked outrage on social media after clients under her health program claimed severe treatment and strict policies about what they could eat in a day, with some even saying they were only allowed up to 500 calories a day (for insight, the average American consumes more than 3600 calories a day). Overall, Mellencamp is definitely going out with a bang – contrary to her ‘boring’ label.

In relation to her departure, further rumors for casting have sparked, including a TMZ article hinting that Kathy Hilton and Kris Jenner could be in talks for joining The Real Housewives of Beverly Hills. While these big names bring excitement to fans of the show, Teddi Mellecamp will be missed by many as she made a name for herself on the show after three full seasons. The timing on Mellecamp’s departure seems to be wrapped up perfectly in terms of her life, as she just gave birth to a beautiful baby girl this year, and is still dealing with the aftermath of a medical condition the child was born with. Teddi Mellencamp addresses this herself in her video announcement (above), but she does weigh in that she would be open to work with BravoTV in the future.